Macrophages are immune cells whose function is to destroy pathogens (eg. microbes or cancer cells) and ensure tissue homeostasis In particular, macrophages cover the surface of our epidermis through a paving network that is self-maintained, with minimal contribution from blood circulating monocytes.

It is generally assumed that, when a macrophage dies, any of its neighbouring cell can divide to fill up the gap left within the defense network.

However, the theoretical results that we obtained based on this hypothesis do not match with the evolution in the clonal cell population levels that we experimentally observe.

We therefore hypothesize the existence of macrophage stem cells, which would be equally distributed among clones, thus regulating their population level. Hereby, we will investigate this hypothesis by combining theoretical simulations (J.F Rupprecht) and biological experimentations (M. Bajénoff).

The overarching goal of this proposal is to decipher the cellular mechanisms underlying self-maintenance of macrophage networks across several tissues (skin, liver, brain). We ambition to create a paradigm shift demonstrating that macrophage rely on stem cells to self maintain over time, a strategy that is abundantly used by other cell types such as epithelia and other immune cell types.

Preliminary simulations suggest that only the one clonal cell population that is the most abundant initially will eventually survive after a sufficiently large number of cell divisions. Since this scenario does not correspond to current results obtained on aged mice, we would like to propose an alternative model in which individual clones would be continuously renewed by local macrophage stem cells that remains to be identified.

The approach is straightforward: 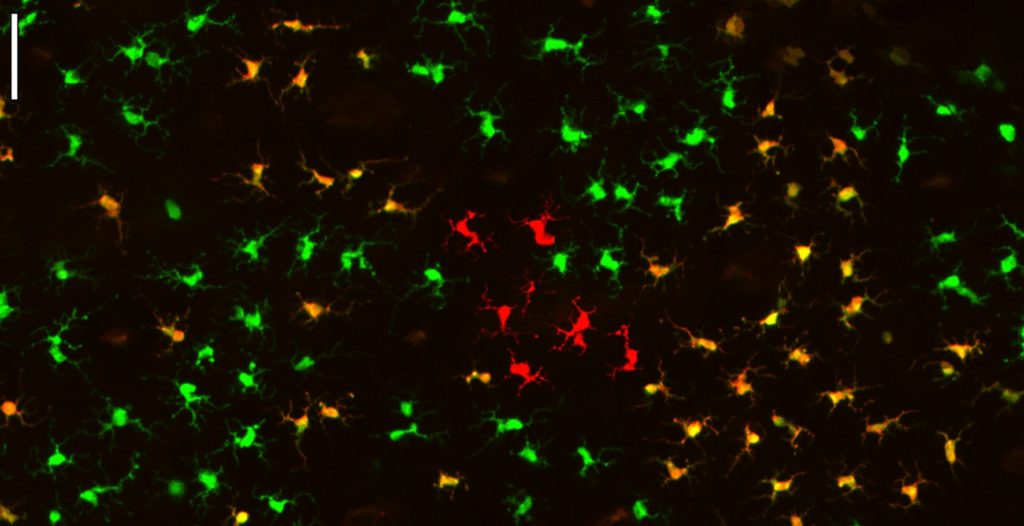 This proposal is interdisciplinary because it involves two teams that are expert in biology and theoretical/computational simulation. From a practical point of view, the biological partner will provide raw data to the computational team which will then provide models and hypotheses to the biological partner who will design new experiments to test these hypotheses. This back and forth discussion represents the foundation of this proposal and this project could not exist without it. The two teams are located on the Luminy Campus, which will ease the interactions.